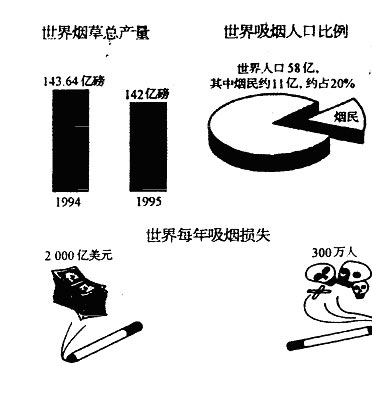 Directions: Widespread tobacco consumption has led to grave consequences, yet the tobacco companies still claim that they make a valbuable contribution to the world economy.

There is a discussion in a newspaper on the above two viewpoints.

Write an essay to the newspaper

1) criticizing their view and

In your essay, make full use of the information provided in the pidctures printed below.

You should write about 200 words on ANSWER SHEET 2.

The majority of people would agree that cigarette smoking has caused serious problems. But the tobacco companies insist that they contribute greatly to the world economy by paying taxes to the government and employing hundreds of workers.

Personally, I believe that cigarette production and consumption threatens to do more harm than good. Firstly, smoking is responsible for many fatal diseases such as lung cancer, heart diseases and so on. According to the survey, tobacco consumers account for about 20% of the world population, and among them, three million people die from smoking-related diseases every year. The fact that the output of tobacco production is reduced from 143.64 billion pounds in 1994 to 142 billion pounds in 1995 also suggests that people have come to realize the negative effects of smoking. Secondly, tobacco consumption is extremely wasteful of money. As is indicatd in the pictures, 200 billion US dollars is lost due to smoking each year. Obviously, the total loss of money around the globe substantially exceeds the gain in the industry.

In conclusion, as the economic development aims at making our life better, we cannot sacrifice our health for short-term financial benefits. If we have to spend more and more money providing medical services for those who suffer from smoking-related illnesses, the notion of promoting economy via tobacco production is not justifable. It is high time that we fought for the total tobacco ban.